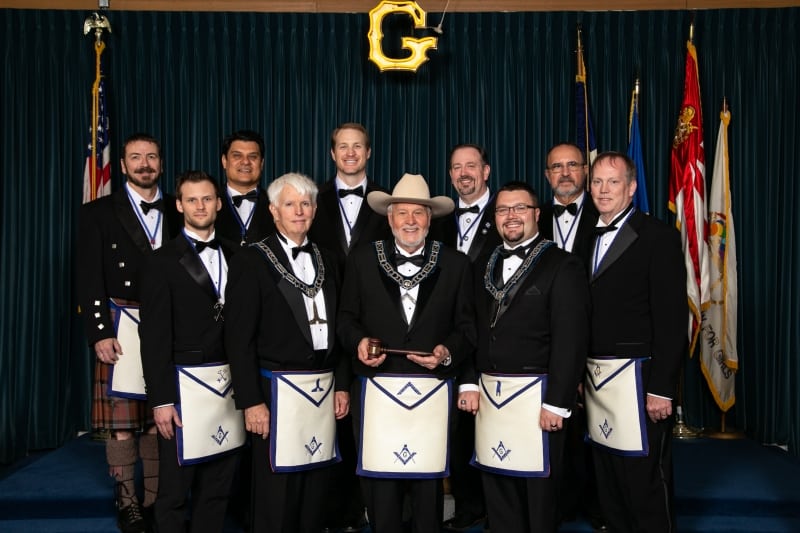 “On June 30th, 2018, Richardson Masonic Lodge installed Dr. Lynn Little as Worshipful Master along with his officers for the Masonic year 2018-2019.

Although a native Texan, Worshipful Master Lynn Little was raised a Master Mason, in 1969, in Old Mission Lodge #153, in Prairie Village, Kansas. There, he also served as Chapter Advisor of the Old Mission DeMolay Chapter. A job change took him and his wife, Mimi, to Los Angeles, but they soon returned to their native Dallas. Over the next twenty years, Brother Little, Mimi, and their growing family moved several more times, living in Boston, Austin, Houston, and Benecia, California, before returning to the Metroplex in 1990. He and Mimi have lived in Plano, TX, for the past twenty-eight years.

During his career, WM Little accumulated several college degrees, including a Ph.D. in Microbiology. He spent most of his academic career at UT Southwestern Medical Center. Brother Little transferred his Masonic membership to the Richardson Masonic Lodge #1214 in 1997 and became active in the Richardson DeMolay Chapter, where his son, Chip, was a member. He became much more active in the Lodge, once he retired in 2015. Today, his son, Chip, serves as Junior Warden of the Richardson Masonic Lodge, and his daughter, Lanna, is a physician in Dallas.

Good luck to each of these Gentlemen in having a good year in the lodge.”