Richardson DeMolays Meet the Grand Master of Masons in Texas 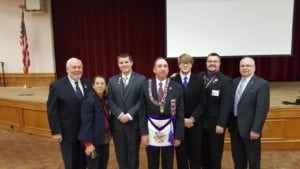 Richardson DeMolays were honored to meet and to be photographed with the Grand Master of Texas Freemasonry, Frank Chapman, at the recent Grand Master’s North Texas Conference. The Conference was held at the Hella Shrine Temple, in Garland, Texas, on Saturday, January 27, one week following the Election and Installation of Most Worshipful Tommy F. Chapman as the 180th Grand Master of the Grand Lodge of Texas. In attendance were 334 Masons, representing 205 Masonic Lodges and 72 Masonic Districts.

Also present were wives, family members, and friends of Masons, plus two Richardson DeMolays, Dylan Bollig and Daniel Brayne, who were photographed with the Grand Master.

DeMolay is a premier Boys’ Youth Group sponsored by Freemasons