Each year, almost two-hundred DeMolays, Chapter Sweethearts, and Rainbow Girls from across Texas convene at the Texas State Capitol, where they “take over” the House and Senate Chambers and debate mock bills, some of which they have written, themselves.

This experience helps these youths to develop their writing skills, if they write bills—their research skills, as they research topics for debate—their analytical and critical thinking skills, as they formulate arguments, in support of, or against, various points of view—and their listening and speaking skills, as they listen to points presented by others and then take the microphone to state and defend their own positions on the various topics being debated.

This experience also introduces this next generation of voting Texans, to the magnificent and historic Texas State Capitol building. It broadens their horizons by introducing them to other bright young people from across the State, who share their values of morality, right living, and civic duty. It also is an experience that can forge friendships that will last a lifetime. 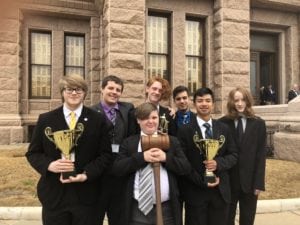