Max, who sought out DeMolay because his grandfather had been a Mason, is 16 years old and an 11th grade student at Richardson High School. Max also is active in BBYO (formerly B’nai B’rith Youth Organization), which he says is a lot like DeMolay. 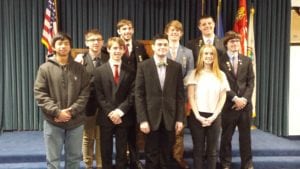 Max also is distinguished by being a ham (amateur) radio operator, and is one of the youngest members of the Richardson Wireless Klub. (See K5rwk.org for more information on this organization.) Being a ham operator can be a fun hobby, but ham operators also play a serious role in society, since they are the only ones who can communicate in the case of an emergency in which all other forms of communication have been shut down.

Thanks to the Garland DeMolay Chapter for helping with Max’s Induction. Paxton Riland performed the Ceremony of Light, and Jackson Derrick performed the Flower Talk. Gabriel Hartsell served as Chaplain. Richardson DeMolays who helped with the Induction included Dylan Bollig, Orator, and MC Reese Johnson, who gave the Obligations. Others, who helped in Opening and Closing the Chapter, included Richardson DeMolays Philip Eyre and Nathan Nguyen. Daniel Brayne also was present but left early for another responsibility.