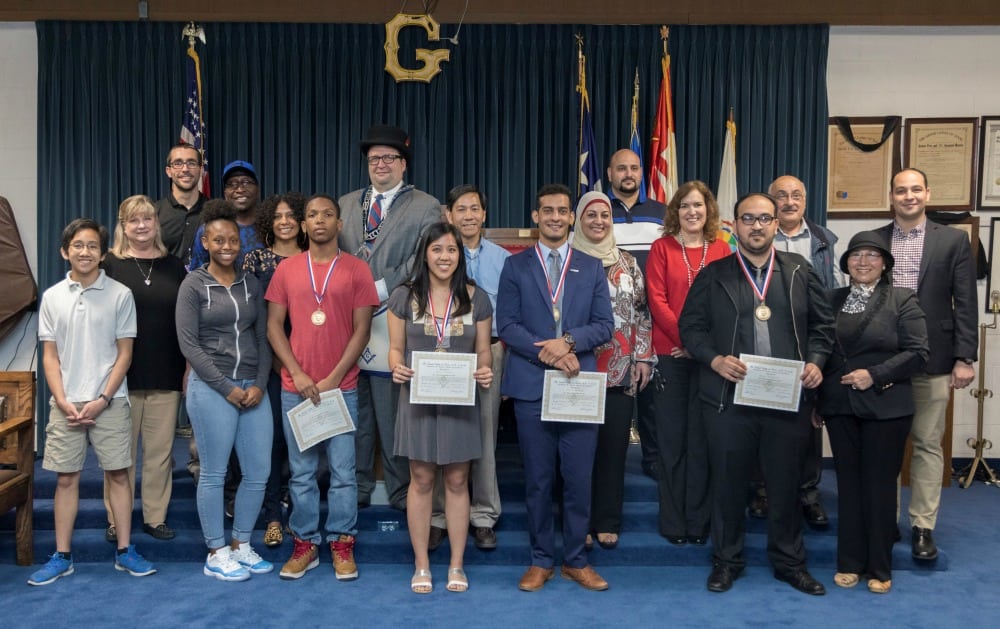 On April 26, 2017, the Richardson Masonic Lodge presented $1,000 Lamar Award Scholarships to four outstanding, eclectic senior students, one chosen from each of the four Richardson High Schools, upon recommendations of their high school counselors. These annual awards are named for Mirabeau B. Lamar, a Freemason, the second President of the Republic of Texas, and the Father of Education in Texas.

Cassius has thrived, thanks to his hard work and respectful and responsible attitude. He designed and produced the construction documents for a community project with the Dallas Police Department, DART, and the architecture firm Workshop, designing 5 Little Free Libraries in honor of the 5 officers slain in a terrorist attack last July in Dallas. With two other students, he proposed and is installing an Art Project in G Hall to improve the hallway experience of all students and staff. Cassius has earned the respect of his principal and teachers for his growth over the last four years, showing that students with special needs can achieve at the level of other outstanding students. He will attend Prairie View A&M University, in Prairie View, Texas, in the fall, to study Architecture.

Born in the US, Ahmed moved with his family to Iraq at age 10, but he later returned to the US due to unsafe conditions in Iraq. He has worked hard to adapt to the US culture, and he is ranked in the top 8% academically in Advanced Placement (AP) classes. He also has been very active in extracurricular activities, participating in SuperSac, Peer Mediator, Peer Helper, Student Council, Football, Wrestling, and he even  helped to establish “Kindness Day” for the entire Richardson Independent School District (RISD). Ahmed even finds time to work part-time at the Afrah restaurant in Richardson. Ahmed is mature, respectful, hardworking, enthusiastic, smart, motivated, appreciative, and determined. He will attend Texas A & M University, in the fall, to study Electrical Engineering.

Hassan’s parents sacrificed to bring him to the US for his education. Unable to go to school, themselves, they wanted a better opportunity for their son. Because of his parents’ sacrifices, Hassan was inspired to dedicate himself to the highest academic achievement possible. He struggled to learn English — practicing day and night to pass his classes.  His father would encourage him, saying, “I’m not telling you it’s going to be easy — I’m telling you it’s going to be worth it.” Today, Hassan is a successful student who tutors and translates into English for many other students. He founded the International Club to bring people together for encouragement and support.  Now in its third year, the International Club   consists of students from 29 different countries, with 33 languages and 40 different cultures. Hassan will attend Colorado State University, in the fall, to study Computer Science.

Amy’s instinct to serve others led to her being selected as a campus Peer Helper for elementary students, and as a Lifeguard to freshmen in the Starting Off Strong mentoring program. Amy shines as a capable, yet humble, leader in the classroom, as captain of the cheer squad, in her community, and in her home. She has taken on the additional role of caregiver to her mother, who has endured serious health issues. At home, Amy provides support to her younger brother by packing lunches, doing laundry, cooking, helping with homework, and being an independent, responsible role model. Caring for others in their time of need has inspired Amy to follow  in her mother’s footsteps and become a Neonatal Intensive Care Unit nurse.  She will attend Texas A&M University, in the fall, to pursue her goal.